Maurizio’s passion for the classical guitar together with his cosmopolitan approach to reach excellence in his profession brought a few friends and family members gathered at the concert to the idea of organizing an international classical guitar competition dedicated to Maurizio.   The first edition of the competition took place from 10 – 16 October 2011 in Bologna, the city where Maurizio Biasini lived and worked for extended periods, from 1975 on. Famous for its rich musical tradition, Bologna was chosen as a UNESCO City of Music in 2006, thus becoming the first Italian city of the UNESCO Creative Cities Network. This network constitutes a global platform that provides visibility to its members and enables them to share knowledge and practices across cultural borders. The cciMB was one of the first cultural events to be included among the initiatives of Bologna City of Music. The Bologna edition hosted 24 excellent young guitarists between 18 and 33 years old, coming from 16 different European and extra-European countries (Syria, Canada). The competition concluded with a final round at the Theatre Manzoni (the main concert venue in Bologna) in the presence of the vice-mayor of Bologna and gathering an audience of 1200, which included many young people.

The second edition of the competition took place form 9 – 15 September 2013 in Basel (Switzerland), a city Maurizio visited often together with his wife Nadia Guth Biasini who now is residing in Basel. Just like Bologna, Basel is known for its vibrant classical musical scene with several outstanding local orchestras and a music conservatory, the Musik Akademie Basel MAB, of excellent reputation. The cciMB 2013 edition, organized in close collaboration with the MAB, was attended by 14 outstanding classical guitarists who had to take on a challenging program with in the final round at the Stadtcasino Basel a commissioned composition by the young composer Yair Klartag and a concert for guitar and string quartet.

From 14 – 17 January, 2016, the San Francisco Conservatory of Music (SFCM) hosted the third cciMB edition with David Tanenbaum, head of the SFCM Guitar Department, as Artistic Director. Novelty at the cciMB2016 was the selection of 12 semifinalists via an online audition procedure as well as the presentation of four concert performances which transformed the competition into a true guitar festival. The opening concert on January 14th 2016 presented no less than two world premieres: a new Clarissa Assad concert, O Saci-Parerê (2013-2014) performed by the New Music Ensemble (Nicole Paiement, conductor; Marc Teicholz  soloist)  and a new composition for eight guitars and two narrators, Nazcan (2015),  by the Chilean composer Javier Farías performed by the San Francesco Conservatory Guitar Ensemble (David Tanenbaum, conductor).

The cciMB returned to Europe for its 4th edition, held from April 27 to May 2, 2018, at the Conservatoire à rayonnement régional (CRR) de Paris, France, under Artistic Director Gérard Abiton. Among over 45 competitors, 13 standout guitarists representing 8 different countries had been selected online for the semifinal round in Paris, where each performed a 30-minute program including a sonata and the cciMB 2018 commissioned composition Cantar de mio Cid by Jean-Dominique Krynen. Jin-Hee Kim (26) from South Korea and Omar Nicho (25) from Peru shared the second prize (EURO 5000.- each). Third prize (EURO 3000.-) went to the Argentinian Fabian Cardozo (31) while the first prize was not awarded. Omar Nicho also won the Savarez special prize of Euro 1000.- for best performance of set piece and cciMB 2016 commissioned composition Imbricatta by Sérgio Assad, who was present at the final round for the occasion.

The cciMB 2018 Festival presented four amazing concerts: the opening concert with Gypsy jazz, flamenco and dance by Antoine Boyer, Samuelito, Sébastien Giniaux, William Brunard and Karine Gonzaliz; a Soirée médiévale by the ensemble La Schola Alumni from Basel, Switzerland (direction Marc Lewon); a concert by the guitar Duo Melis and finally a concert by cciMB2013 winner Emanuele Buono and Quatuor Strada. For the first time, the cciMB included a social outreach program organized in collaboration with Elías Abraham Fóscolo of the Association PlayForRights and the international solidarity and outreach movement Emmaüs. 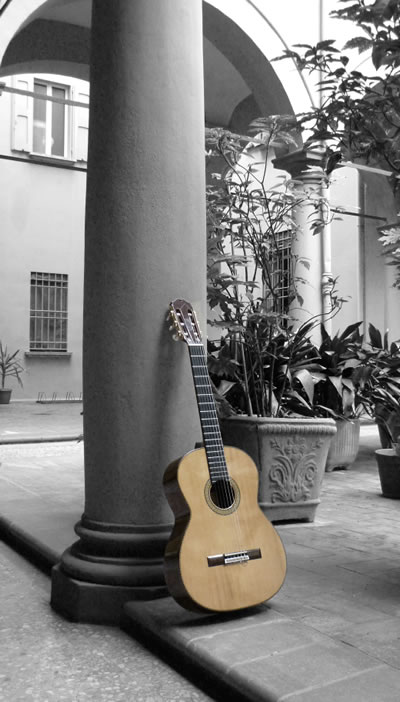