Antoine Boyer drank from the most authentic sources of Gypsy jazz, like Mandino Reinhardt and Francis-Alfred Moerman, with whom he recorded in 2009 a first CD-DVD, immediately noticed by French (Jazzman) and American (Vintage Guitars) critics.  Antoine Boyer's second album Leské, has received several awards, including the Bravo  of Trad'Mag magazine. Following the publication of his 3rd CD Sita, Antoine Boyer was singled out by Jazzman magazine and chosen as Revelation 2012 by Guitarist Acoustic. In the same year he joined Gérard Abiton's classical guitar class at the CRR in Paris, with whom he continued his studies until 2016. Antoine Boyer has performed at most festivals dedicated to gypsy jazz in the United States and Europe, sharing the stage with such renowned musicians as Philip Catherine, Stochelo Rosenberg, Angelo Debarre and many others. Together with Samuel Rouesnel (Samuelito) with whom he forms a guitar duo, he won the 4th European Guitar Award (Dresden, 2016). 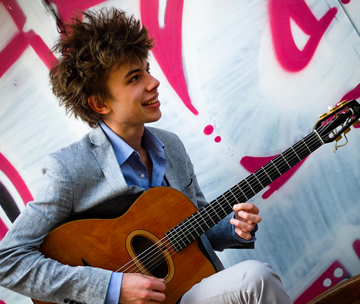