The Orchestre des Jeunes du CRR de Paris is one of the orchestras of the Conservatoire à Rayonnement Régional – CRR de Paris, a performing arts school of the City of Paris, which counts 1,650 pupils and students and 280 teachers. This orchestra brings together students of the cycle spécialisé, a special training program of the curriculum that serves as a transition between initial studies and the entry in institutions of higher education. As such, it is a decisive moment, in which the passion for music of young musicians will be put to the test. Will it provide enough strength to devote for several years the greatest part of the day to improving instrumental play, to the disciplines essential to acquire the right perception of musical language and to the work, a crucible for artistic sharing?

In particular with regard to orchestral work, it is appropriate at this stage to establish specific techniques regarding attitude and orchestral play. This is achieved above all by studying the great classics: Mozart, Beethoven, Schubert, .. but also by meeting directly with composers. In recent years, the Orchestre des Jeunes du CRR de Paris has had the chance to interact with  Edith Canat de Chizy, Kaija Saariaho, Philippe Hersant, Nicolas Bacri, Philippe Hurel, Anthony Girard, Thierry Escaich, Krystof Maratka, Jean-Louis Agobet, Pascal Zavaro….. The orchestra also had the opportunity to meet great soloists, like in 2014 when it had the great pleasure of accompanying concert cellist Yo-Yo Ma! It is all about embracing the diversity of styles, in fact a recent experience with the composer Jean-Marie Machado and the saxophonist Andy Sheppard has opened the doors to jazz. This experience continued in February 2015 at the Philharmonie de Paris with Ibrahim Maalouf and Oxmo Puccino.

The orchestra performed in the Euro 2016 match-concert at the Philharmonie de Paris and in May 2017, it will participate in the Bangsokol Show in collaboration with a traditional Cambodian music group at the Cité de Paris as part of the Philharmonie de Paris season. On average, the orchestra gives about a dozen concerts annually in various locations in Paris and Ile de France, but above all in the beautiful Auditorium of the Conservatoire in rue de Madrid. 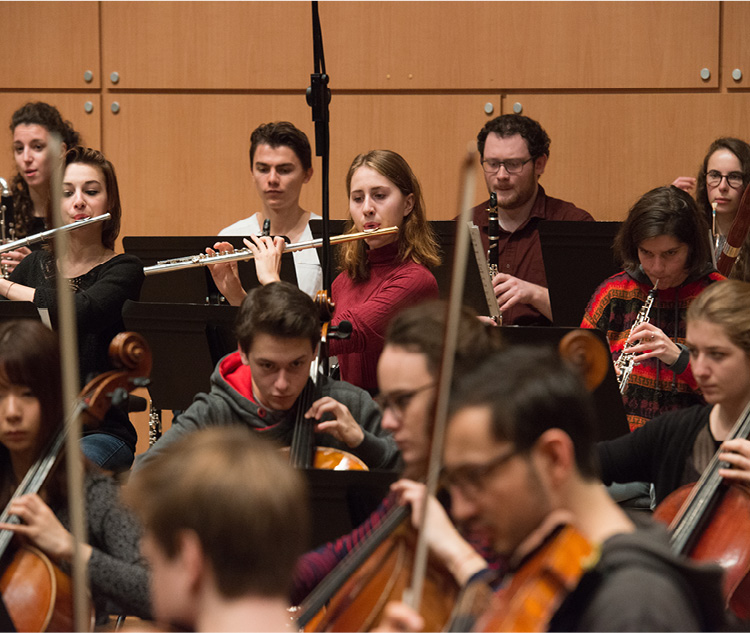