Winner of many national and international awards, Marco Vinicio Carnicelli specialized in the repertoire for guitar and orchestra, guitar recital and piano duo. He has held concerts at prestigious concert venues, embassies, and Italian Cultural Institutes in many cities around the world, as a soloist, with orchestra and in recitals. After graduating from the Bari Conservatory, he continued his studies with the great Venezuelan master Alirio Diaz, perfecting and perpetuating the tradition of the polychrome and brilliant South American and Spanish repertoire. Furthermore, he attended several courses in conducting and phenomenology of music held by the famous Romanian conductor Sergiu Celibidache in Germany, France and Italy. Other important figures in his musical education were the guitarists Salvatore Pirrello and Linda Calsolaro.

Among his recorded works, a CD that includes transcriptions from the repertoire for guitar and orchestra of the Concierto de Aranjuez by Joaquín Rodrigo and the Concerto in D major by Mario Castelnuovo-Tedesco in duo with piano (for the Waveahead label, broadcast by Radio Rai 3 - Record News). Carnicelli is a founding member of the Association International Guitar Competition Maurizio Biasini. He is currently the holder of the chair of guitar at the N. Piccinni Conservatory of Bari. 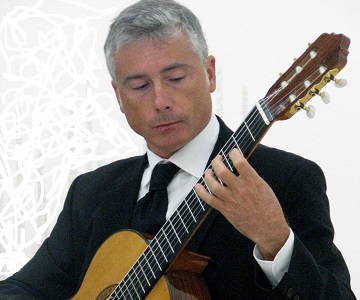